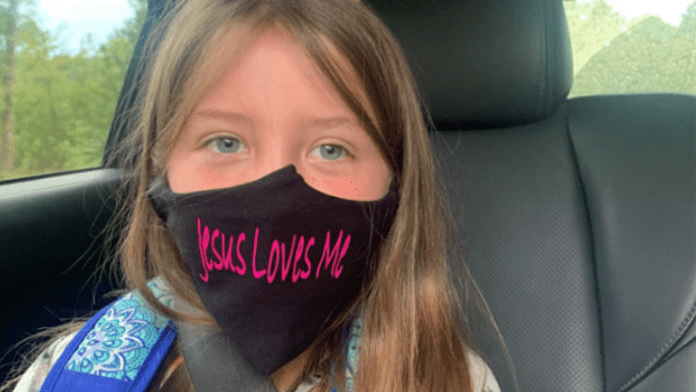 On October 13, 2020, a third-grader at Simpson Central Elementary School, located in Pinola, Mississippi, was forced to remove her mask that said “Jesus Loves Me” in large pink letters across it.

According to WLBT News, 9-year-old Lydia Booth was ordered by her principal to remove her mask and wear another one, her attorneys said.

On October 15, 2020, Simpson County School District’s Superintendent Greg Paes sent a letter out to all the parents, students, and staff that stated, “Masks cannot display political, religious, sexual or any inappropriate symbols, gestures or statements that may be offensive, disruptive or deemed distractive to the school environment. This expectation was outlined in our restart plan and is specific to masks only.” Paes also wrote that “The principal and superintendent will be the final authority on the appropriateness of any mask worn to school.”

Alliance Defending Freedom (ADF), who according to their website has been advocating for religious liberty, the sanctity of human life, freedom of speech, and marriage and family for more than 25 years, filed a federal lawsuit November 2, 2020 on the behalf of Lydia and her parents, Matthew and Jennifer Booth.

ADF attorney Michael Ross said, “Public schools have a duty to respect the free expression of students that the First Amendment guarantees to them.”

The lawsuit requests (line 10), “Preliminary injunctive relief is necessary because Lydia Booth desires to immediately wear her ‘Jesus Loves Me’ mask and masks with similar religious message, to school, but is self-censoring her speech because Defendants (Simpson County School District) have enforced and will continue to enforce their Religious Speech Policy against her, which will subject her to the escalating discipline outlined in those policies for repeat infractions, to and including suspension.”

The suit also claims that (line 17), “Lydia Booth is an adherent of the Christian faith and desires to share her religious views with her schoolmates.”

The filed lawsuit (line 67) gives examples of how the Defendants regularly permit Lydia Booth’s schoolmates to wear masks, with messages on them. The examples were provided by Booth’s parents who witnessed masks worn by students and faculty with the Jackson State University logo, New Orleans Saints logo, ‘Black Lives Matter’ statement, and other expressive messages on them.

Principal Woodall called Lydia’s mother Jennifer (line 88) to inform her that her daughter had been required to wear a replacement mask due to Booth’s mask reading “Jesus Loves Me.” Woodall claimed that the student handbook prohibits religious messages on masks. When Mrs. Booth asked to be shown where that is located, Woodall referenced the “Dress Code for Students policy which prohibits ‘clothing advertising alcoholic beverages or drug culture, clothing with obscene language or gestures or clothing of any suggestive nature.’ ” Mrs. Booth told Principal Woodall that “Jesus Loves Me” doesn’t fit the criteria mentioned in the policy.

In an email to the principal and superintendent, Lydia’s mother responded shortly after the principal’s call and requested her child return to wearing her mask “TODAY” and have an apology to her from the school district. Mrs. Booth stated, “According to the Mississippi Student Religious Freedom Act that took effect July 1, 2013, you are prohibited from discriminating against students by their expression of religious perspectives.”

Assistant Superintendent Robert Sanders later replied to Lydia’s mother admitting that the student handbook does not prohibit her daughter from wearing the “Jesus Loves Me” mask, but the school’s Restart Plan (due to COVID-19) prohibits masks with “political, religious, or sexual references” on them. Mrs. Booth asked how a message on a T-shirt differs from one on a mask, referring to the handbook not prohibiting such clothing. Sanders responded by saying, “If the district allowed Lydia to wear the ‘Jesus Loves Me’ mask then the district would also have to allow a mask with the message ‘Satan Loves Me.’”

“Although that would be sad,” Lydia’s mother responded, “a student should be allowed to wear a mask with the message ‘Satan Loves Me’ if they chose to do so.”

ADF Senior Counsel Tyson Langhofer asserted, “No public school student should be singled out for peacefully sharing her religious beliefs with fellow students.”

The suit says Lydia Booth is seeking injunctive relief, declaratory relief, and nominal damages against Simpson County School District and the Board of Education of Simpson County, Mississippi, for violating her rights and the rights of other students under the First Amendment and Fourteenth Amendment.

Previous articleOrganic Food, Essential Oils and the Dangerous Gospel of ‘My Way is Right’
Next articleHow to Have Hope Without Giving in to Fear