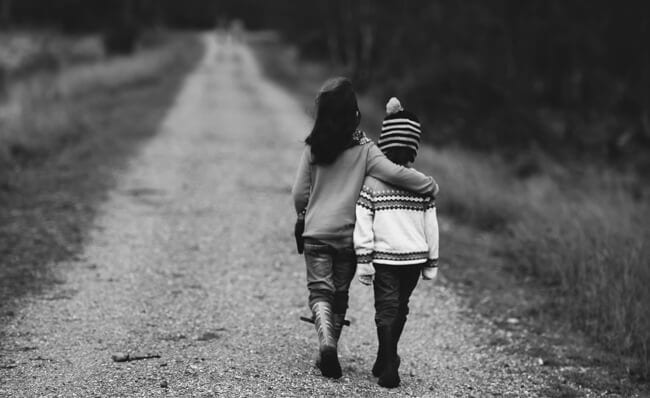 My five-year-old daughter, Liz, said this to my four-year-old son, Matt, recently.

Matt put his arms up together, compared them, then gave me a quizzical look like, Dad, is she right?

I gave an answer straight from the textbook, “We’re all different.  Everyone is beautiful in their own way.”

Fair point. (These are not my kids’ real names. Like Katy Perry, I have over 500 Twitter followers, and fake names are necessary to protect our privacy.)

I’m most comfortable making poop jokes. It’s what I’m best at and I have a built-in audience at home who love toilet humor. I started out on Twitter last year and made some initial funny observations related to my kids that did fairly well with a tough Twitter audience.

And then the Parkland shooting happened. As a lawyer and CNN watcher (and Fox News when I’m in the mood for a sitcom), I feel like I have a decent understanding of the issues. Yet I was hesitant to comment on Twitter. It’s hard to transition from doody jokes to the Second Amendment.

So I continued to make dumb jokes. For a few days, those jokes were mostly ignored. And rightly so. Of course, these shootings have become so commonplace that, after a week, my corner of Twitter fell back into its groove and potty humor became well-received again.

I plan to stay in my lane on Twitter. But outside of Twitter, I can’t just stay in my lane. When you’re a parent and you see these shootings, you have to care. You drop your kids off at school and worry about security. I even drove to the school Liz’s school, and stopped at a traffic light. I looked at myself in the rearview mirror and saw I had not shaved in a while (I’m really trying to play this writer role up). I turned around and drove home and shaved because I didn’t want to look dangerous while dropping the paperwork off.

As I sit here, I think, what can I do to decrease the chances of this happening to my children? Clearly, getting out to vote for people who will ban assault weapons is imperative.

Also, there’s a common thread among many school shooters going all the way back to Columbine; they were social outcasts and victims of bullying.

Now we all know bullying is bad and prefer our kids don’t do it. This is no great revelation. The more complex question is, Why do kids feel the inclination to be cruel to each other in the first place?

And that brings me back to my own family’s situation; a prototypical case of a kid who’s going to be subjected to bullying if ever there was one.

My son was born with CLOVES Syndrome, a rare overgrowth disorder, in which his right arm and hand are much larger than his left arm and hand; his right foot is deformed; he has a large growth on his stomach; and probably most prominently, he has port wine stains all over his body (red spots). While he was a little slower to walk than most kids and receives regular PT, OT and every other T imaginable, he’s done remarkably well in his 3½ years on Earth.

Since Matt was a baby, we’ve given him and Liz a bath together every night save for a few nights my wife and I were too lazy to give them one. In those first 1,000 baths, Liz never uttered a word about any of his deformities. To her, I guess he was normal. That was what a boy looked like. Eventually, though, it was going to happen.

Before that moment, the closest I had come to this situation was when Liz said to me a few months back, “Daddy, I don’t like Jenny.”

But this one hit much closer to home. It’s my son. It’s real. He does look different. And it’s not the last time he is going to hear this from someone.

In fact, he’s getting a regular preview of what’s to come. Since Liz first pointed out his arms are different, she has also told him his toes are stuck together and he has one sick arm.

When she says these things to him, different emotions come over me. I feel bad for him. I get mad at her even though she’s five-years-old and doesn’t know any better. I feel like a failure myself for making a child with deformities that will make his path through childhood more difficult.

But why is she saying these things to him? She’s not a particularly mean kid.

To a degree, she’s just making an observation. She’s also confused as to why her brother looks different. Probably more than anything, though, Liz is trying to affirm her own normalcy.

And that’s where the problem lies. Just what is normal? And why is it so important to be normal?

I don’t know how Matt is going to turn out. Medically, we’re doing all we can. Psychologically, he’s got some genetics to battle with half his DNA made from me. (I’m convinced there was a drug passed around Woodstock that decreased the serotonin count in our fathers’ sperm.)

However, I know I am going to go above and beyond to hammer into my kids’ brains that they need to accept everyone. If Jenny has a quality that is different, it’s actually the coolest thing about her.

We’ve even amended our response when Liz makes comments to her brother. “Matt’s large arm is like a superhero arm. He’s so lucky he has such a cool arm.”

I can’t control how other parents will raise their children. I just hope the kids who Matt goes to school with will be taught the same lessons.

Because when you think about it, who’s really normal anyway? We’re all deformed in one way or another. If you don’t look or act different, you probably have something going on inside. Just look at me. I present pretty well on the outside, but my brain is all kinds of deformed. I never had to deal with bullying because it wasn’t something others could see.

That something which is imperfect about each of us: That’s what makes us unique. It’s what makes our life important. It’s a critical factor in how we will each make our own mark in this world.

For more from Brett Grayson, check out his new book, What Could Go Wrong? My Mostly Comedic Journey through Marriage, Parenting and Depression

Brett Graysonhttps://brettgraysonbooks.com/
Brett Grayson is the author of What Could Go Wrong? My Mostly Comedic Journey through Marriage, Parenting and Depression. His writing has appeared on Scary Mommy and The Good Men Project. A successful trial attorney with offices throughout the five boroughs of NYC and New Jersey, he lives in New Jersey with his wife and two children.