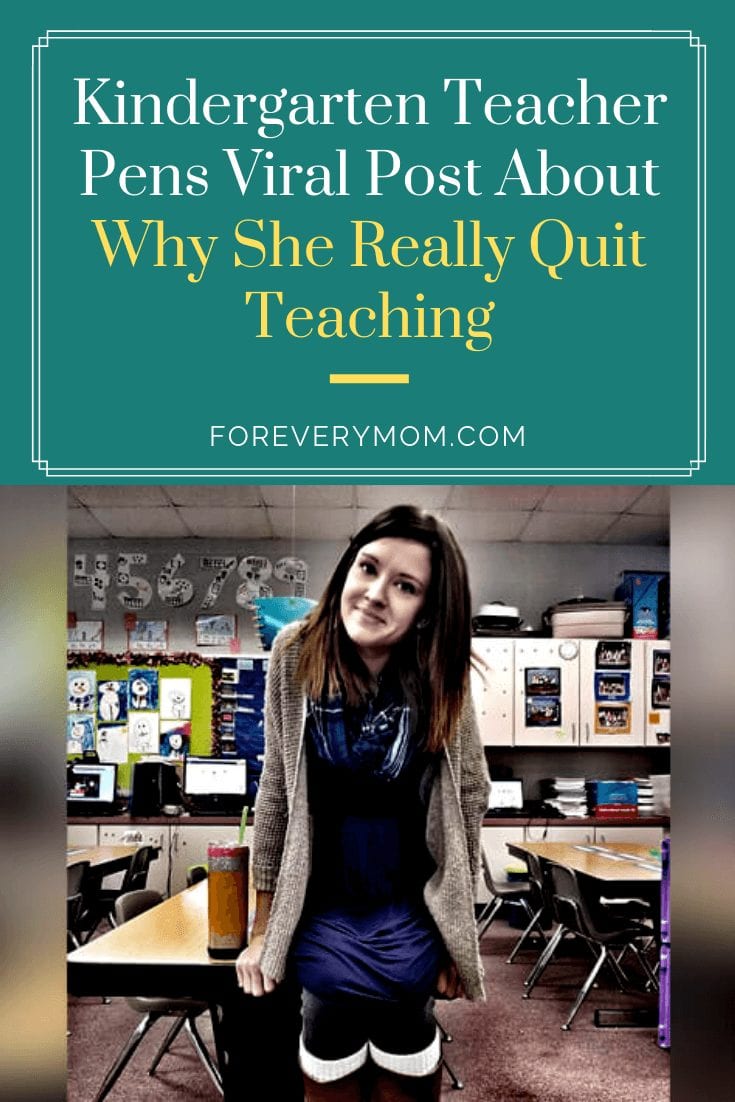 “And since our technology approach doesn’t seem to be working, teachers must need more training,” Gentry writes.

She says in order to keep up with the demand, schools are taking away valuable planning time from teachers and requiring them to miss precious classroom time with students for useless training that renders no return on investment.

4. Teachers Are at the Mercy of Parents

With teaching comes a partnership with the parents — as the two main groups of adults who are pouring into the same children. But that partnership is no longer a given.

“Instead of holding parents accountable… and making them true partners, we’ve adopted a customer service mindset.”

Rather than working together as influential adults to lead a child in the right direction, it’s become an all-out war of parents versus teachers.

“I’ve seen the Facebook rants about attendance and getting ‘the letter.’ Well, here’s the thing… I can’t teach your child if he’s not in school,” she writes. “I was cussed out by parents who wanted to attend field trips but missed the THREE notes that went home — and when they did attend a trip, sat on their phone the entire time. I’ve had parents stand me up multiple times on Conference Days then call to tattle on me when I refused to offer an after-school option.”

All of that boils down to the shell of a woman that’s left at the end of the day. Gentry says it all put her mental and physical health in jeopardy “Every. Single. Day.”

“Knowing that your kids need and deserve more than they’re getting. Sitting in one meeting after another, begging for more support, only to be told ‘don’t lose sleep over them’… when you LOVE your kids and are PASSIONATE about your mission… these messages tear you apart.

“Watching them come in… dirty clothes… chaos at home… and knowing they need more than you can give them in a classroom of 21, with less and less support, multiple languages spoken, several different disabilities… it breaks you. We become emotional eaters. We become couch potatoes to zone out. We become so short fused that our families suffer.”

And ultimately, that’s what led Gentry to walk away from her retirement and 46 paid sick days.

“I didn’t leave for better pay,” she writes. “I decided to start with my 1 at home… and work to help other mommas be able to show up for their ones at home. Because… I really do believe it starts there.”

Her passionate and brutally honest words have been shared more than 173,000 times in the last week, garnering a myriad of praise from teachers and parents alike.

Many shared in their sadness that such a “wonderfully caring teacher” has been lost to the classroom, while others shouted praises of agreement from their own experiences in the world of education and beyond.

“There is an enormous amount of educators who feel that exact way but have felt alone and guilty for thinking so,” Gentry told Good Morning America. “I never expected it to reach farther than a few friends — but I am so humbled to be able to throw the curtains open on the issue and give those who feel unable to say it a voice.”

Previous articleMy Parents Made Life Easier for Me, and I Intend to Do the Same for My Kids
Next articleShould Kids Watch Disney’s New “Turning Red” Movie? One Mom’s Honest Review