Home Family & Parenting It Was a Perfect Morning—Until I Heard a ‘POP’ Backing Out of...

There’s the rosiness of early sunrises, kids who get along. Nutritious breakfasts. Orderliness and obedience. All tucked neatly into the one-hour period before we shove out the door, dropping kids off to school, reporting to work, going back to school for pick up and doing it all over again the next day.

These mornings are rare, friend.

But two weeks ago, I promise we had just such a morning. I walked laps around our subdivision, as the sun rose from the other side of the world, showering our neighborhood in brilliant oranges, reds, pinks. Gorgeous hues that fuel my soul.

Lunch boxes packed, teeth brushed, all five kids getting along. There was a small bit of smugness as I called out to the five of them, “Get in the van. If you all load up, we’ll be super early.”

Early matters to them because the earlier you arrive at school, the more “morning recess” time you receive. Morning recess on sunny, good-weather days means Four Square. It’s a middle school sport that involves a ball, and four squares. And lots of lots of ferocious quarreling about whose ball is in, whose is out, and if the ball ever crossed the line. I’m fairly certain the shouts of “redo” can be heard from around the other side of the globe. But four square was on all our minds, as we loaded into the car minutes earlier than our 7:30 “go time.”

It was when we went into reverse and rolled out of the garage that there was an explosion of sorts.

I shut off the music, stopped the car and said “Who left something out that we rolled over?”

Then I opened the door. It was all over. White snow. But snow doesn’t fall in the garage, I told myself. And it was late August. In South Louisiana. Definitely not snow. There was still a hissing noise, even as I opened the door.

That’s when I knew.

What some might call snow, I knew to be spray paint. The night before, the can was carefully placed on the brick ledge in our garage. Somehow, come morning, it had rolled underneath my left front tire. 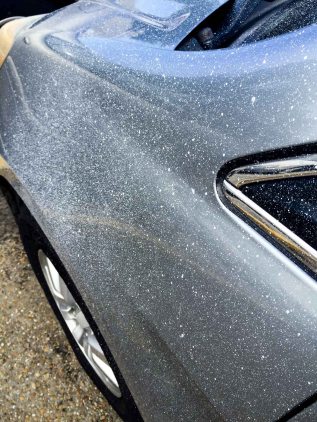 I hopped back in and backed all the way out of the garage, and grabbed the garden hose and began hosing off the van and the inside of the garage. It didn’t help. If you’re waiting on spray paint to dry, it takes forever. If you’re hoping it doesn’t dry, it dries in seconds. 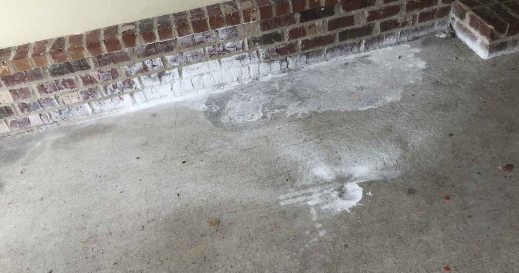 The white dots of spray paint snow all over the left side of my van were there to stay. As was the glob of white all over bricks, floors and wall of the garage. I tried for at least two minutes to spray the hose continually on the van, just standing there, praying it would somehow go away. It didn’t. I picked up the hose and sat my dejected self back into the van. All smugness was gone.

The kids were silent,  a wise decision on their part. They all stared at the back of my head, which now rested against the steering wheel, in total disbelief.

Who knocked the spray paint can off the brick ledge?

Why didn’t I pick up the spray paint after I spray painted the shutters?

Why does this kind of stuff always happen to me? (Which was a lie but the predominant thought. This is my first explosion of spray paint all over the car. So clearly the ” this always happens to me” line was a lie.)

I picked up my head and told the kids, “well, we still have to get to school”

Apparently, they felt free to talk at this point. All of them asked, in their individual way, the same question.

“What’s daddy going to say when you tell him?”

One even asked if I would tell him at all. As though he wouldn’t notice that our silvery blue mini van had thousands of white specks of paint all over.

I defended myself against their onslaught of questions. My head reeled, knowing that I would have to tell him about our morning. I would start with the hearty breakfast, packed lunch boxes, signed agendas, then make my way into the spray paint explosion.

Or maybe I would make up a story about something really terrible, and then say “Just joking. Really, I only ran over spray paint and painted our van with a few thousands specks of spray paint.” It’s a strategy I once recommended to a friend, but it didn’t work so well for her situation, so I decided to go with an honest confession.

The kids were dropped off at school and all looked back at me as they walked away from the van, with a look of sorrow in their eyes, probably wondering how I would survive all alone having to tell their dad about how I spray painted the minivan.

I asked again if he was sure he wanted to talk.

“I was backing out of the garage…”

I couldn’t even form a complete sentence. I cried my eyes out trying to tell him about the spray paint, the car, the garage, the bricks. Between heaving sobs, I attempted to apologize. The more I tried to stop crying, the harder I cried.

I tried to tell him all the reasons why maybe he would have wished he would have picked someone who didn’t run over spray paint cans on her way to drop the kids off to school. Who wouldn’t have a garage forever marred by her carelessness.

He wouldn’t listen and said it again.

Somewhere in the middle of this morning, the thought had crept in that maybe he was tired of me. Tired of the me that can manage to mess everything up in seconds.

If he would have chosen someone else, she probably would have been way more put together, neat, never-ever careless. The list in my head went on and on.

But the list stopped when I heard those five words.

He said them to me a few more times, and then said he had to go, that he and his crew were on their way to a job site, and he couldn’t talk long. It’s one of the only times I’ve cried that hard in front of him. I know it’s just a vehicle. Just a garage. Just a brick ledge.

But it brought to surface everything festering underneath. Maybe there’s wives out there who don’t run over spray paint cans. (Well, that’s true. I’m not sure I know of another who has. And my friends who found out, immediately told their husbands, in an attempt to prove to their husbands that it could be worse. They could be married to me.)

But the man who chose me said “It’s okay. I love you.”

He didn’t offer to buy me a new vehicle. Or clean the garage. Or take care of the mess.

But he didn’t fuss or fight or belittle. Later, he even said it could have happened to anyone. (I quickly inserted a few names of people I know who would never ever, not on their worst day, run over a can of spray paint they had left out. But I appreciated the thought.)

And when the kids got home from school? Well, that was the best part. They ran into the car at pick up line, and all five clamored in, and immediately asked the question burning on their minds.

My smile widened, and my heart felt full.

They didn’t believe it. I think all five secretly hoped he would have fussed me and maybe even gave me a punishment or two. They asked him when he got home later that night if it was true.

He confirmed it, and they shook their heads in disbelief. Only one kid was as nonchalant as him about the spray paint. She suggested we simply spray paint the rest of the van as well. Not going to happen.

But I pray they never forget those words by their daddy to the woman he loves.

It’s an echo of what their Heavenly Father says about them. We tell him our stories, confess our sins, and He says to the repentant heart, “It’s okay. I love you.”

Those five words can make driving around in a spray-painted mini van a little more bearable.