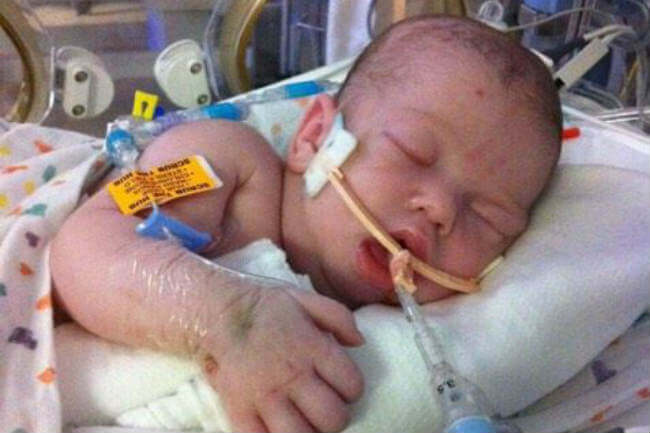 If I Had Given Him Just One Bottle, He Would Still Be Alive

By Jillian Johnson with commentary by Dr. Christie Del Castillo-Hegyi

Landon would be five today if he were still alive. It’s a very hard birthday–five. It’s a milestone birthday. Most kiddos would be starting kindergarten at this age. But not my little guy. I wanted to share for a long time about what happened to Landon, but I always feared what others would say and how I’d be judged. But I want people to know how much deeper the pain gets.

I share his story in hopes that no other family ever experiences the loss that we have.

Jarrod and I wanted what was best for Landon as every parent does for their child. We took all of the classes. Bought and read all of the books. We were ready! Or so we thought….every class and book was geared toward breastfeeding and how it’s so important if you want a healthy child. Landon was born in a “Baby-Friendly” hospital. (What this means is everything is geared toward breastfeeding. Unless you’d had a breast augmentation or cancer or some serious medical reason as to why you couldn’t breastfeed, your baby would not be given formula unless a prescription was written by the pediatrician.)

Landon was born full-term weighing 3360 g or 7 lbs. 7 oz, born by emergency cesarean due to fetal intolerance to labor. Apgars were 8 and 9 and he was stabilized. He was transferred 2.5 hours later to the Mother-Baby Unit and returned to his mother. He exclusively breastfed with excellent latch for 15 – 40 minutes every 1-2 hours.

Landon was on my breast – ALL OF THE TIME. The lactation consultants would come in and see that “he had a great latch and was doing fine” but there was one who mentioned I may have a problem producing milk. The reason she gave was because I was diagnosed with PCOS (polycystic ovarian syndrome) and it was just harder for women with hormone imbalances to produce milk. She recommended some herbs for me to take when I got out of the hospital.

While in the hospital, his mother’s risk factors for failed and delayed lactogenesis II (copious milk production) were identified by the IBCLC-lactation consultant. They were borderline diabetes, PCOS, issues with infertility, small, widely spaced nipples with minimal growth during pregnancy, being a first-time mom and emergency c-section. Despite that, she was encouraged to exclusively breastfeed. She was closely monitored with nurse, lactation consultant and physician support. Her baby’s latch was rated as excellent.

On second day of life, we was crying and nursing all the time. Here he is frantically trying to suckle.

Landon cried. And cried. All the time. He cried unless he was on the breast and I began to nurse him continuously. The nurses would come in and swaddle him in warm blankets to help get him to sleep. And when I asked them why he was always on my breast, I was told it was because he was “cluster feeding.” I recalled learning all about that in the classes I had taken, and being a first time mom, I trusted my doctors and nurses to help me through this – even more so since I was pretty heavily medicated from my emergency c-section and this was my first baby. But I was wrong. I’ve learned I have to be my child’s number one advocate.

Previous articleA Valentine Letter to My Husband: You are Not the Man of My Dreams
Next articleHow to Practice Self Care Without Feeling Mom Guilt

Jillian Johnson
illian Johnson lost her son Landon to accidental starvation due to her body not making milk. She is working with the Fed Is Best Foundation to prevent other deaths and let mothers know that Fed is best.