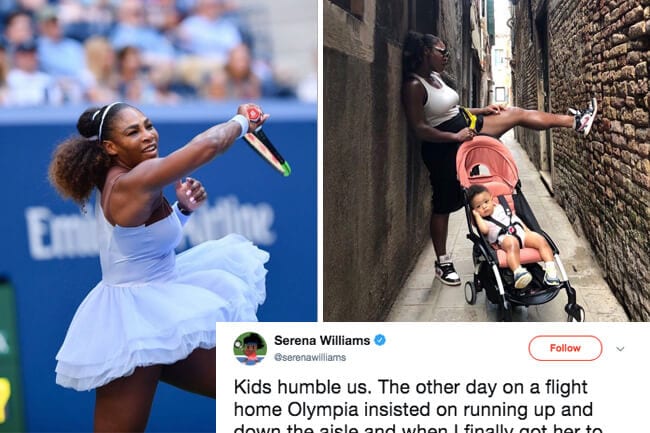 Just days before making her return to the U.S. Open on Monday since giving birth to her daughter Olympia, Tennis superstar Serena Williams took to Twitter with a REAL mommy moment we all can appreciate.

Using the hashtag #ThisMama, Williams took to Twitter to share what happened while flying with her 11-month-old daughter, Alexis Olympia Ohanian Jr.

“The other day on a flight home Olympia insisted on running up and down the aisle and when I finally got her to sit still, she threw up all over me,” Williams tweeted.

Kids humble us. The other day on a flight home Olympia insisted on running up and down the aisle and when I finally got her to sit still, she threw up all over me. #ThisMama would love to hear your stories of motherhood.. even ones like this! Share and tag them with #ThisMama. pic.twitter.com/9N5duB2M3t

She shared the experience saying “kids humble us,” and turning to parents in the Twitter-verse for support asking for more humbling and humiliating stories of parenthood. What she got in return were laughable and relatable parenting tales as she headed back to work.

This mama shared how her son helped to tame some of her grays:

3 years ago I was reading ‘The Little Engine That Could’ book to my 4 year old and he decided my head made the perfect mountain to put his motorized train on. It literally took 0.003 seconds to get jammed in my hair. On the plus side, it helped remove some gray hair.#ThisMama pic.twitter.com/Z1dPLxgwD3

This mom who got a birthday surprise like no other:

On my 32nd birthday, my 2.5 mos old son and I went to my mom’s house for the day. I nursed him then put him on my shoulder to burp. Turned my head to check the burp cloth to see if he had spit up, and he turned his head and spit up into my mouth. Happy birthday to me. #ThisMama

Or this mom who realized she and her hubs needed to speak in code:

I took my kids to work with me every day. My husband and I would discuss work at home. One day my oldest walked around the office and told one of my employees “my mommy is going to fire you”. From that day on we talked in code words. #ThisMama

#ThisMama is part of Williams' partnership campaign with Chase. But this tennis master who is currently going for her 24th Grand Slam Title--her 7th at the U.S. Open--is no stranger to being REAL about motherhood.

Since welcoming her daughter last fall, the 36-year-old has been open about the challenges and triumphs of motherhood, including her battle with postpartum depression.

It just goes to show that even the world's greatest athletes are no match for the ups and downs of motherhood. But like Williams, we wouldn't have it any other way!

Previous articleLawnmower Parents, You’re Mowing Down Your Kid’s Future
Next article“Girl, Wash Your Face” — What Rachel Hollis Gets Right…And Really Wrong in Her Bestselling Book