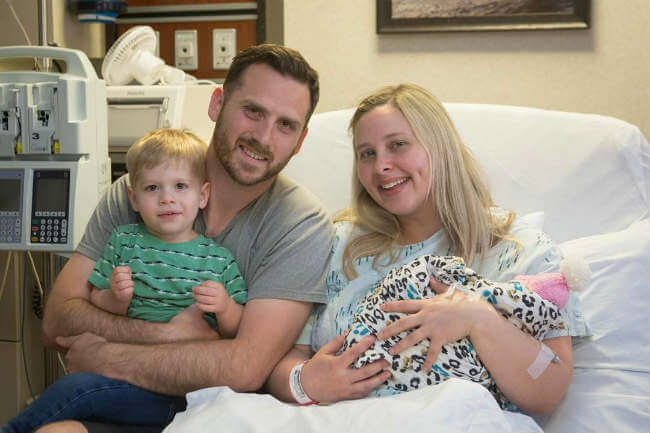 ***This story has been updated at the end with additional information from the family.

Previously on For Every Mom, I introduced you to Keri and Royce Young, and their unborn daughter, Eva Grace. Upon a soul-crushing pronouncement from their doctor that baby Eva had no brain, Keri was able to find the strength and grace to say, “If I carry her full term, can we donate her organs?” After Royce, a reporter for ESPN, posted that story on Facebook, the Youngs and Eva Grace quickly went viral. Keri’s ability to see that their could be beauty our of their tragedy touched the hearts of hundreds of thousands  of people.

“You can be the most pro-life person in the world, but until you sit there and you, you hear those words and you look at your future going forward, that’s when you have got to face the reality and make your own decision.”

Keri took to Facebook to address the issue of why she chose NOT to end the pregnancy with this poignant statement:

“It’s my body.” These words hurt me to the core. Today I watched my husband, my very best friend, cry as he told a brief…

“It’s my body,” she says. “Those words hurt me to the core.” Her acknowledgement that Eva’s life is more than just her decision on what to do with her own body is so powerful! She says it was so hard to watch Royce cry while telling a story about Eva, though she isn’t even born yet. And yet, through their pain, the Young’s say they put a lot of effort into savoring the pregnancy, while Eva was alive and safe in her mama’s belly.

As they neared Eva’s due date, Keri Young says she was desperate to hold on to her daughter’s precious life. She told ABC News:

“I’m now terrified of delivery. I don’t want her to come out, you know. She’s healthy right now, and I love feeling her kick, and that, that was surprising. It was. It was very surprising […] She’s as perfect as she’s going to be right now. So I don’t want to give that up.”

Royce added that they would be there for her as long as she breathed on this earth, saying, “For as long as she lives, 24 hours, 48 hours. We realized we’re her momma and her daddy and we got to do […] we have got to do our job.”

But of course, not even a mama’s willpower can make time stand still. Eva Grace Young was born on April 17, 2017, and lived less than 24 hours.

They fulfilled their promise to care for their baby girl, and cuddled her close as long as they could. I’ll be honest here, Royce’s Instagram post holding his daughter just about broke me. These parents are SO strong.

Despite their grief over their lost little girl, the Youngs know her life held incredible value and it comforts them to know that her donated organs saved other lives.

“She’s going to do more in her 24 hours or whatever than maybe we’ll ever do in our lives,” her dad said. “And to be able to remember our daughter in that way is pretty powerful.”

Please join me in praying for the Youngs in their grief, and for the people who received Eva’s organs. And let’s also pray that this message of the value of LIFE continues to spread far and wide.

***UPDATE: a statement released by the Young family confirms that Eva was NOT in fact, born alive. However, they were still able to donate her eyes. Please read the full statement here.

Previous articleThis Is What 24 Hours Postpartum Looks Like—and It’ll Give You Goosebumps
Next articleA Letter to My Husband: I Still Choose You