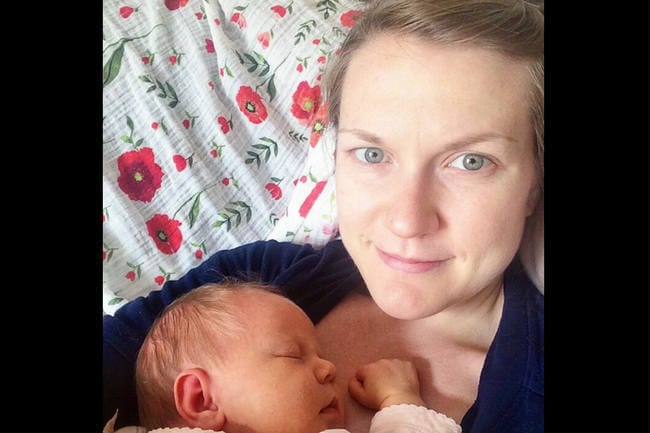 The One Postpartum Expectation That Changed Everything For This New Mom

I’ve heard that when you have a newborn, the days are hard, the nights are long, and the exhaustion is unbearable. I won’t deny any of that. But I’ll also admit that I loved the newborn weeks with my baby girl, and I’m already slightly eager to do them again (very, very slightly).

To tell you the truth, I felt decently rested and I recovered fairly well in those first few weeks of Selah’s life, and it’s not because she is a particularly easy baby. (She isn’t.) Yes, I was overwhelmed. Yes, I was terrified of breaking her. Yes, I wondered if I’d ever feel normal again.

But I knew that this season would be heartbreakingly short, and I was determined to enjoy every single moment I could — and I did.

So I decided in advance to also set my expectations low for myself.

I decided I wouldn’t do the things I normally do — not just physical things like doing dishes, cooking meals, cleaning, working, and blogging, but also the emotional things like tearing myself down when I look in the mirror, putting pressure on myself to get one more thing done, and guilting myself into believing that I’m lazy for choosing rest.

My only expectation for myself during those first few weeks of Selah’s life was this: learn how to love my baby.

This one expectation changed everything and allowed me to fill my days with actions that put the two of us first.

I committed myself to memorizing the smell of the space where her cheeks meet her mouth, the wrinkles on her tiny fingers, and the curve of her upper lip.

I laid on the couch for most of the day, binge watching Friday Night Lights while she slept on my chest, and I kissed the top of her head and breathed in that fleeting newborn smell.

I let my husband rock her in the middle of the night so I could get as much sleep as possible before the next feeding.

I whispered words of love and encouragement while I helped her latch on, even when it hurt so badly I could hardly stand it.

I let the tears run freely down my cheeks when I felt like I couldn’t keep going.

I said yes to every person who offered to bring a meal, clean my house, or fold my laundry.

I reached out for help from my mom friends in the crisis moments, begging them to tell me that what I was experiencing was normal.

I let other people hold my baby while I showered, ate, and took care of my hurting body.

I told myself that whatever hard thing was happening would be over in a few days.

I reminded myself that these newborn days would be over in a blink, and I’d want them back.

I let my baby be a baby, I let myself be a mess, and I gave us both grace as we learned how to become mother and daughter.

Recognizing that the transition from womb to world was probably more traumatic for Selah than it was for me allowed me to treat us both with the gentleness we so desperately needed in our first weeks together. I held her as often as I could, cradling her tiny body close to my skin. I wept with her when I needed to and allowed her to comfort herself with my body as often as she needed it.

And here I am ten weeks later, slowly becoming myself again. For almost a year, my daughter and I have been one person, sharing one body during pregnancy and even now as I breastfeed. It’s equal parts freeing and heartbreaking to watch her as she becomes independent and to feel myself craving some independence too.

But those newborn days will live in my memory as some of the sweetest, hardest, most emotional days of my life, and I will always think of them as the days when I became more fully myself by giving myself completely to another person.

The deepest relationships in life, our strongest bonds, are formed when we give ourselves completely away.

This doesn’t mean I’m not still myself. I need to explore my own desires, be my own person, and not lose myself in motherhood.

It simply means that I’m learning to love this new version of myself, one that comes with fewer expectations, less guilt, more joy, and more forgiveness. A new version of myself whose sharp edges and need for control are softening, whose stretch marks are slowly fading, whose heart is stretching and tearing and deepening its capacity for love.

This article originally appeared at BrittanyLBergman.com.

Brittany Bergman
Brittany L. Bergman is a writer and editor living in the suburbs of Chicago with her husband and her daughter. She is passionate about living a simple life marked by authenticity and gratitude. Brittany writes about living simply, savoring motherhood, and finding the sacred in the everyday at BrittanyLBergman.com. You can also find her on Instagram and Facebook.