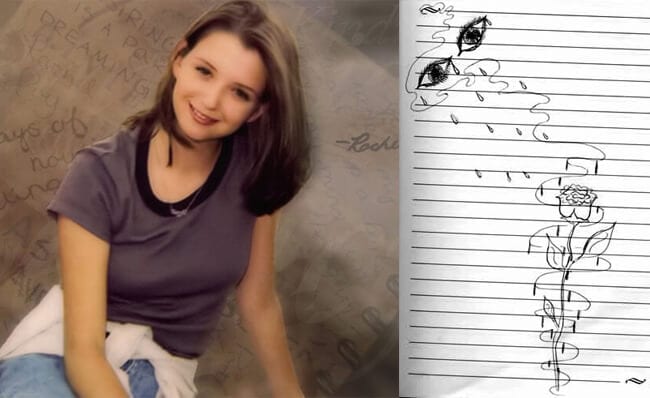 Columbine, 20 Years Later: 13 Tears, 13 Lives, and One Girl Who Witnessed to the Bullies Who Killed Her

As news spirals this week about potential school shootings and threats to our kids’ safety, people across the country are reflecting back on some of the most painful mass shooting anniversaries in recent U.S. history.

13 people were killed in the massacre that day.

Growing up in Colorado myself, I’ve known about the devastation and memory of the shooting since I was five years old. I’ve competed in sporting events at Columbine High School, and I’ve even had teachers who were at the school on April 20, 1999 — the day of the shooting.

I first learned about Rachel Scott when I was a sophomore in high school. Her story and her legacy is so incredible that I’ve kept it with me for years since first hearing it.

Rachel Scott was bullied throughout her high school years.

She was a devoted Christian teenager, open about her faith at school and unashamed to witness to others. But doing so took a toll on her reputation. She was made an outcast, betrayed and like any high schooler, she had her struggles. But through it all, she loved God greatly. Her diaries hold the words of her daily testimonies.

“I have no more personal friends at school, But you know what? I am not going to apologize for speaking the name of Jesus,” she wrote in her journal. “I am not going to justify my faith to them, and I am not going to hide the light that God has put into me. If I have to sacrifice everything I will. I will take it. If my friends have to become my enemies for me to be with my best friend Jesus, then that’s fine with me.”

Three weeks before the shooting, Rachel witnessed to the shooters, Eric Harris and Dylan Klebold. They too were bullied, outcasts and they really didn’t have any friends. But Rachel knew that all they needed was Jesus. Unfortunately, they were blinded by hate, and they even made videotapes mocking her Christian faith.

“I have this theory that if one person can go out of their way to show compassion, then it will start a chain reaction of the same. People will never know how far a little kindness can go.”

On the day of the shooting, Rachel was the first person shot on the school’s campus. Dylan and Eric shot her twice in the leg and once in the back. The boys walked away but returned seconds later after seeing she was still alive. Dylan grabbed her by the hair and asked, “Do you still believe in your God?”

When her unflinching and unwavering response was,“You Know I Do.” Eric told her, “Then go be with him,” and he shot her in the head.

After police cleared the school and investigated the event, Rachel’s backpack was returned to her family, complete with her diary. What they found inside was the foundation that continued the chain reaction Rachel lived for.

Two hours before the shooting, on April 20, 1999, Rachel drew a picture in her diary.

It was of her eyes shedding 13 tears that trickled down to a rose and turned to blood drops. Thirteen people were killed on campus that day. The rose was connected to a Columbine plant, with a Bible verse underneath it that says, “Greater love has no man than this, that a man would lay his life down for his friends.”

That drawing inspired her parents to write a book called Rachel’s Tears.

After her death, many students that Rachel had reached out to shared stories with the Scotts about the profound impact her simple acts of kindness had on their lives; even preventing one young man for taking his own life. They soon realized the transformational effect of Rachel’s story and started the nonprofit organization that is Rachel’s Challenge today.

Every day, 160,000 students skip school for fear of being bullied. Rachel’s Challenge exists to inspire and equip every person to create a permanent positive change not only in themselves but in their schools, their businesses and communities.

In the 19 years since the Columbine shooting, Rachel’s Challenge and the story of Rachel Scott has touched more than 22 million people.

She even inspired the film PureFlix film, “I’m Not Ashamed” featuring Duck Dynasty stars Sadie, Kori and Bella Robertson. It tells the story of Rachel Scott and her unwavering faith.

Though Rachel’s Challenge is not involved or associated with the film in any way, Pure Flix has taken the incredible story of how one person’s compassion can start a chain reaction, and put it on an even greater platform.

Rachel’s life is a powerful testimony to the wonderful ways that God uses those who love Him. Her life was only 17 years long, but God has taken her legacy and touched millions. “I want you to use me to reach the unreached,” Rachel wrote to God in her diary.

Learn more about Rachel Scott’s story and her fire for Jesus in the Pure Flix film I’m Not Ashamed.