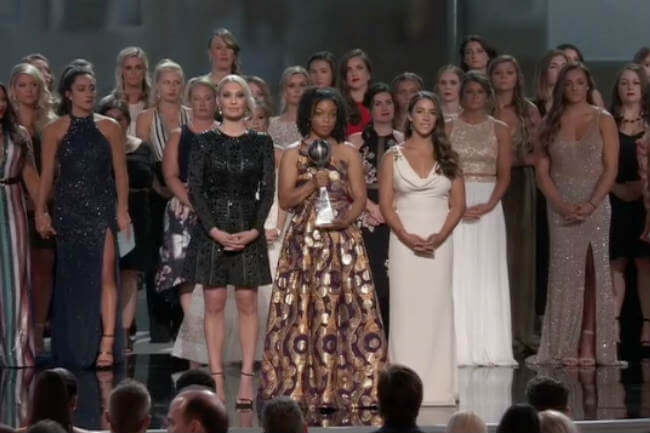 Last night at ESPN’s annual sports awards, the ESPYs something extraordinary happened. The Arthur Ashe Courage Award, named for the famed tennis player who died of AIDS, was presented to not one, but to over 300 honorees: the survivors of sexual assault by former USA Gymnastics team doctor Larry Nassar. Over 140 of those survivors took the stage to receive the award from actress Jennifer Garner, after an incredibly powerful video featuring many of them and narrated by Garner aired. I strongly urge you to take nine minutes out of your day to watch these women who could be you, who could be your daughters.

These women weren’t just Nassar’s victims, they were, as Garner says,victims of a culture where “no one wanted to stand in the way of accolades and gold medals…where athletes were disposable.”

Watching the video is hard, but so necessary. The athletes describe Nassar as “shameless” and “very brazen.” It’s important to note and understand that he was able to operate that way because other adults that should have been protecting these children allowed him to. Why should he fear getting caught? It’s sickening.

As I watched the group take the stage amid a standing ovation from the audience, I got goosebumps. The reason? There were just so many of them. If you watch the video replay, you will see that it takes almost two full minutes for all of those survivors to make their way up on stage. They just kept coming, and coming, and coming, from the wings of the stage and from the audience. It was incredible, inspiring, and heartbreaking all at the same time. Because…the women there represented less than half of the survivors who have come forward, and common sense tells you there are certainly dozens if not hundreds more.

Three of the survivors led the way and gave a joint speech while accepting the Arthur Ashe Courage Award: Sarah Klein, who identified herself as Nassar’s first known victim, her abuse taking place thirty years ago, softball player Tiffany Thomas Lopez, and Olympic gold medalist Aly Raisman. The women all had powerful things to say, but this quote from Raisman struck me as the most profound, and the most tragic:

“The ripple effect of our actions, or inactions, can be enormous, spanning generations. Perhaps the greatest tragedy of this nightmare is that it could have been avoided. Whether you act or do nothing, you are shaping the world that we live in. Impacting others. All we needed was one adult to have the integrity stand between us and Larry Nassar.”

I encourage you to watch their acceptance speech video as well. Watch how long it takes for 141 victims of the same man’s sexual abuse bravely take the stage. Watch and be empowered by their strength.

The group of Nassar’s survivors has been dubbed “Sister Survivors,” and though they give each other strength, I’m sure this is a club no one ever wanted to be a member of. Seeing them speak out with passion and poise in the video that preceded the Arthur Ashe Courage Award, one can only imagine that these amazing women all have backbones of absolute steel to go with their tender and hurting hearts.

Another blistering quote from Raisman listed all the years in which a victim had spoken up against Nassar and had been dismissed.

With this Arthur Ashe Courage Award, ESPN has drawn a line in the sand

ESPN would not exist without sports; without coaches and officials and athletic associations it would be a non-entity. The fact that ESPN allowed Raisman to so vehemently and publicly scold the people in the administration of her sport surely sends a message about where the channel’s loyalties lie: with athletes, with individuals, with the soul of a person rather than with their potential for athletic acclaim. I have to give them respect for that.

The moral of the story is this: speak up, speak OUT. If you have any inkling that something untoward may be going on between an adult and a child, no matter WHO that adult is, no matter how powerful…speak UP. If one adult had done the right thing in 1997, most of the women accepting that ESPY award would not have needed to be on that stage.

May we all have the courage to be the ONE to prevent a mass tragedy like this from happening again.

Previous articleMom Hack: How to Deal With Anxiety [In Kids]
Next articleMillenials and Zennials, Don’t Let the Middle Child Go Extinct