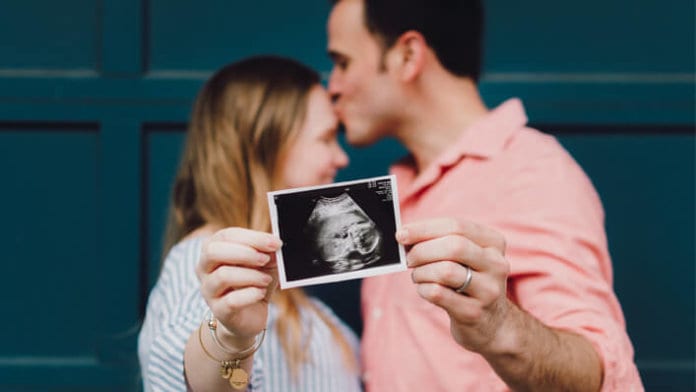 I waited until I was 12 weeks along to announce my pregnancy to my “web of people” on social media.

“HEY, YOU GUYS. WE’RE HAVIN’ A BAYBAY!” was plastered all over my wall, along with some super adorable pregnancy announcement photos my friend snapped a few weeks before. The support and love flew in. The predictions of the sex and the hunt to find the perfect name started. We had just announced our pregnancy to thousands of our friends and family. 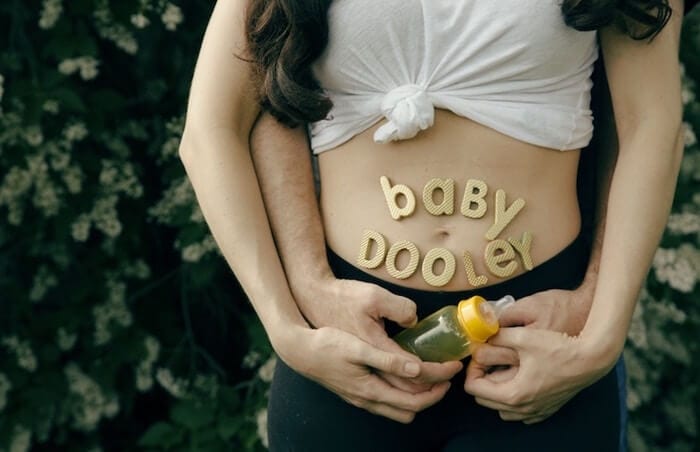 Photo by Amy Lynn, used with permission from Rebecca Swift.

We were over the moon excited. And then, two days later, I started bleeding.

I called for my partner, Patrick, from the bathroom with a shaky voice. It wasn’t just a dot of blood. It wasn’t brown. It was bright red and there was a lot of it. I remember how huge his eyes were.

We both immediately knew this couldn’t be right. After friends assured us that a little bleeding is fine and that everything was most likely OK, we called the clinic and set up an appointment for the next morning.

There wasn’t any cramping (yet), and we spent the evening scouring Google and WebMD for any answers we could find. The most information we could dig up was from equally worried women begging for answers themselves on random forums. The conversations always started with blood. “What color was it? How much was there? Was there cramping? How far along are you?” But still, this was all speculation and every case seemed to vary, so we looked forward to seeing our doctor as soon as possible.

As we arrived for our appointment the next day, we walked hand-in-hand and attempted to ease the tension with jokes and banter. We opened up the famed Pokemon app our kids had been playing while we waited, and we giggled about finding a Pokemon sitting on the exam table between the stirrups and my legs. We were nervous, but at least we would have answers in the near future.

The doctor came in and we got right down to business. He poured the goop below my stomach, lifted the heart monitor, and placed it down against my skin. Pat and I took a deep breath and waited.

I heard a slow heartbeat and almost knocked the doctor over with excitement, and he said “No … that’s your heartbeat.” And then, nothing. We couldn’t find a beat. The tears immediately started streaming.

We moved into the ultrasound room, and once again, it was confirmed that there was no heartbeat. We cried.

We were shown that the embryo had actually stopped growing at seven weeks. They asked if I wanted the ultrasound picture. I whispered “no.”

I learned there are two separate functions in the growth process, and while the fetus growth had halted, the amniotic sac had not, which is why my body continued to think and operate like I was pregnant several weeks after.

Then, I learned there are two options to remove what they now referred to as the “contents of the uterus.” I could get a D&C (dilation and curettage), where they surgically open the cervix and remove or “vacuum” out the contents, or let nature run its course. I didn’t know much about either, so I didn’t decide right away. If I wanted to, I could have the procedure the next morning. I told them I would be in touch.

As we walked out, none of the nurses made eye contact. I have never felt so cold or alone while surrounded by a group of women. I sniffled hard one last time and tried to keep it together.

The rest of the night was a blur. We held each other, told family members and close friends. Then I thought of the thousands of people we told on Facebook. I quickly felt embarrassed. How would I dodge a million questions in parking lots and at parties and over social media over the next few months?  We would think about that later, we decided.

I was told having the D&C procedure was a “pleasant” way to speed up the process and obtain some closure, so we chose to have the procedure and scheduled an appointment for the next day. Then, the cramps started.

It was around 8:30 p.m. when I started feeling the discomfort. These “cramps” were more painful than any period cramping I had experienced. And over the next hour, as they kept coming back, the time in between was shortening from 15 minutes, to 10 minutes, to five minutes…

I decided to sleep it off and mentally prepare myself for the next day. But I couldn’t sleep. I was tossing and turning.

The cramps were more painful than ever, and I raised and contorted my pelvis and scrunched into the fetal position to try to suppress it. It was excruciating.

This was more painful than giving birth to either of my two daughters (and, yes, I had pain meds back then). I realized as the cramping grew more frequent and painful, they weren’t cramps at all — they were contractions. I was going into labor.

Patrick carried me to the bathtub and we ran a warm bath with Epsom salt. The words of my doctor flashed through my mind: “You may feel pain. You might not. It can happen naturally. You might not even notice.”

I winced through the pain, and every time I had a contraction, a wave of blood filled the tub. Patrick held my hand (in between dry heaving into the bathroom sink), and after a half hour of the most pain I’ve ever experienced in my life, I said “it’s coming.” And I pushed out a small fluid-filled amniotic sac with a tiny embryo inside. The pain stopped all at once. We could breathe.

We didn’t know it could happen this way. I didn’t know you could go through the pain of childbirth with a miscarriage.

I didn’t know how I felt about being 31 and not knowing that this completely natural thing thousands of women go through every single day was physically possible.

How is my body’s natural way of flushing out a baby that wasn’t going to thrive, and the pain involved, something I had never heard of before?

Even as we had researched our options online, nothing had led us to believe that not immediately having a D&C could leave us in this position. I feel my doctor could have better served me by preparing me for the worse-case scenario, not the best case.

I dried off, tossed on a robe, and scooped up the amniotic sac in my hands. I placed it in a tiny gold jewelry box of my daughter’s. It was the best thing I could find at 1 a.m. Somehow it felt to me like a gold encrusted shrine wouldn’t have sufficed for this poor little baby. Biased mother, you know.

It rained that night. Patrick and I found an area in our garden in the backyard. He grabbed a shovel and started digging as the rain fell on us. It was serene and quiet out, and I was thankful to have his support and kindness there by my side.

Watching a father-to-be dig a hole and then place a golden box into the dirt — something I thought was going to be our child we would raise for the rest of our lives — was one of the hardest things I have experienced in this lifetime. I was glad it was over.

The next day, I woke up tired, defeated, and sick to my stomach because, although the hard part was over, I still had to admit to the world what had happened.

I like to keep a positive attitude on social media, but I couldn’t ignore this. So I trudged over to the computer and laid it all out: 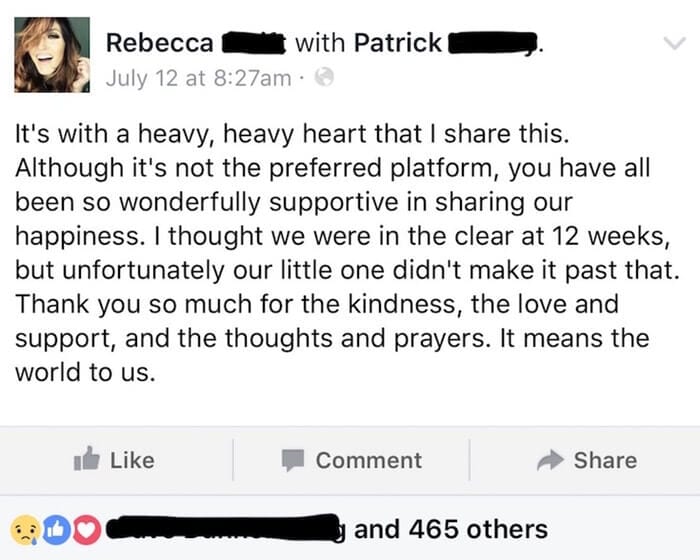 “It’s with a heavy, heavy heart that I share this. Although it’s not the preferred platform, you have all been so wonderfully supportive in sharing our happiness. I thought we were in the clear at 12 weeks, but unfortunately our little one didn’t make it past that. Thank you so much for the kindness, the love and support, and the thoughts and prayers. It means the world to us.”

The thing I was mortifyingly embarrassed to admit and dreaded putting out there quickly became my saving grace. Love surrounded us. The support and the uplifting messages poured in. We didn’t feel alone.

Friends and acquaintances from high school and college and all walks of life, husbands of wives who had gone through it themselves, women who had braved the dreaded bathtub scene all reached out to send their love. It felt so good to talk about it. I know a lot of people suffer in silence.

An estimated 1 in 6 pregnancies end in miscarriage. There are up to a million cases in the United States alone per year.

For me, learning these statistics and knowing how common miscarriage is hugely helped me with the grieving process. I know we all grieve differently, some publicly and some privately, but the support and stories that have been shared with me since publicly announcing my miscarriage have made me feel less alone.

I wonder how more prepared I would have been in making a decision about my D&C had I been able to find more detailed information from women who had been through this.

That’s why it’s been heavy on my heart to share my personal experience. As real and painful and horrifying as it was, I’ve decided not to sugarcoat it for a second. Because if I’d known what a miscarriage could really be like, I would have been more prepared for what happened to me that night.

For those of you who have gone through or are going through a miscarriage, know that I’m grieving with you and surrounding you with my love. Know that it’s more than OK to talk about, and there are millions of women just like you. You are not alone.

Previous articleTo the Mom Who Feels Bad For Being Too Busy
Next articleSo You Have Breast Cancer, Now What?

A Letter to Mom — I Miss You This Christmas