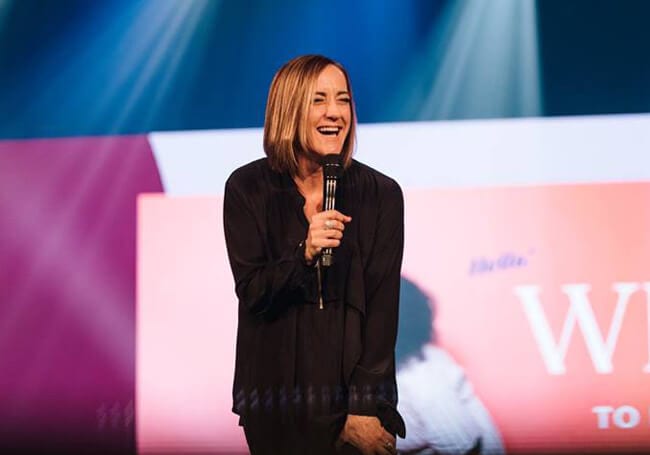 “Be un-offendable. In the words of Taylor Swift, shake it off.”

After being left in a hospital unnamed and unwanted, Caine experienced sexual abuse for twelve years. “I was very broken and Jesus redeemed me, Jesus healed me,” she said. “And so not only did Jesus rescue me, but redemption is that He now uses me to rescue others.”

Today, most of Caine’s work revolves around inspiring and bolstering women. Along with her husband, Caine has co-founded the A21 Campaign, an anti-human trafficking organization, and Propel Women, which is intended to empower women to honor their calling while developing a sense of God-given purpose.

A21 was recently recognized in Mumbai with the Mother Teresa Memorial Award for Social Justice by Gandhi’s great grandson, for providing water containers for refugees.

As a little girl, Caine said “I did always love Wonder Woman, but in reality, I loved Mother Teresa. That’s why getting the award blew me away because I have always honored and loved that woman.”

In a Heroes for Her Podcast with Bible Belles founder, Erin Weidemann, Caine discusses her passion “to make Jesus last command her first priority and by giving her all to see the lost saved and to build the local church globally.”

Their primary work in the refugee camps “Is helping to identify potential victims of trafficking, because those that are the most vulnerable to being trafficked are the ones nobody’s looking for,” Caine said. “And nobody’s looking for refugees because they don’t know that they’re missing.”

Part of their work involves reminding the world that slavery is alive and well, still in this day and age.

“We’ve got offices on every continent because the fastest-growing crime worldwide is the trafficking of human beings for sex and for labor,” Caine said.

With 15 offices in 13 countries, A21 is also recently responsible for a very high profile public official and some police officers in Thailand being put away for 127 years, and 220 years, and 300 years for trafficking four to 12 year old’s in a northern region of Thailand.

“When I started, I felt like Moses in the back of the desert when the Lord said, ‘I want to use you to set my people free.’ And Moses is like, ‘But God…’”

At 40 years old, having just had her second daughter, Caine explained it wasn’t like a Bible story for her anymore.

As to the success of A21, Caine quickly gives credit to the contributions of thousands of partners enabling them to see someone rescued every day, and their traffickers put in jail. “That’s actually who the heroes of A21 are. It’s those people that go, ‘I can’t do everything but I can do one thing and I’m going to do one thing’.

Caine and Weidmann share experiences with thyroid cancer diagnoses. In the podcast, Wiedmann notes that she is especially drawn to Caine’s views regarding fear and the unexpected events that can throw your world into chaos and test your faith.

Caine’s new book, Unexpected, talks about why people, (specifically women), experience fear in regard to the things that we don’t expect and result in scary situations.

Caine explains that for her, the fight was not against cancer, it was against fear.

“Everything continues, and you know, I’ve got two hundred staff around the world, I’m running all of that,” she said. “You go, okay well you know I just got this devastating news, but it didn’t stop everything else.”

As a result of her diagnosis, Caine got into the Word in a whole new way, finding herself using a Bible app three times a day declaring scriptures to keep her head from going down a negative track.

“The enemy has always been after our faith and that’s why, you know, scripture says that we’ve got to fight the good fight of faith,” Caine said. “So, the fear makes you not operate in faith because you just shut down, fear makes you pull back, fear makes you go, ‘I’m not good enough.’”

As parents in the twenty first century, with the internet and social media, Caine and Wiedmann believe understanding what fear is and what you can do to counteract it for God’s glory, is fundamental in how you approach parenting.

That’s why, in part, Caine feels the basic message of her book, Unexpected, is, “even though the world and your friends and everyone around you is going cray-cray, you don’t have to.”

The book explains that many times unexpected to us is not unexpected to God. Because He is sovereign, and He is good, what is revealed to us is what we think of God. If you believe that God is good, then even whatever you’re going through is not good, God will work it out for your good. He is trying to teach you something through it, He wants you to grow.

When something unexpected happens, rather than thinking God has forsaken us, He trying to get you to discover more of Him.

And, in a final piece of advice to young girls who may be listening, “Be unoffendable,” said Caine. “Like don’t hold on to offense, let it go. So in the words of Taylor Swift, learn to shake it off.”

Previous articleHis Mom Mysteriously Snuck Out Every Christmas Eve—After She Died, He Got This Letter
Next articleCan You See the Advent From God’s Perspective?