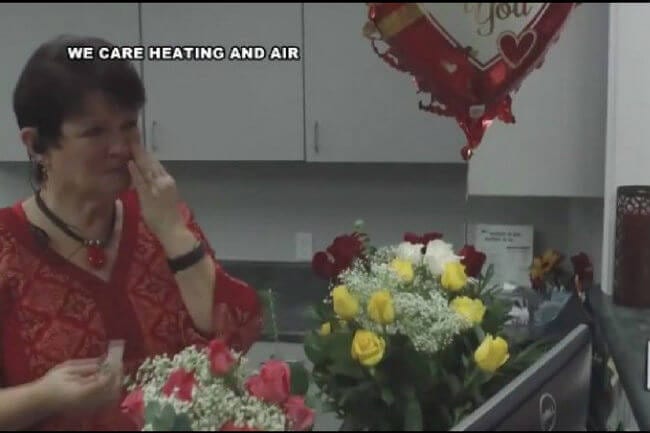 I know, I know Valentine’s Day was SO LAST WEEK, but…this is a Valentine’s story like none other I’ve ever heard, and it was SO sweet I just had to share it with you. Because how often to grown kids give their mom a Valentine’s gift, really? And this..is one for the AGES, mamas.

Georgia mom of three grown boys Elizabeth Holt was at work on Valentine’s Day when her husband (and her sons’ stepdad) surprised her with flowers and a balloon, which is enough to make Holt teary-eyed all by itself. But, that’s not NEARLY all, as the door to her office keeps opening, and one by one her three grown sons all enter with a bouquet of flowers for mom.

Now Mama Holt REALLY can’t take it, and she is a mess of tears, overwhelmed by the show of love from the men in her life. But she has no idea there’s MORE…her last son to come in asks, “Where’s your keys?” and a confused Holt says, “What?”

THEN he hands her a set of keys and they walk her outside…asking her to press the alarm button on the key set, which sets off the alarm on a brand new Toyota 4Runner.

An overwhelmed Holt can barely get her bearings as she protests through tears, “It’s too much!” and her sons explain to  her that the car is 100% hers, “no payment, no insurance, no nothing.”

Holt’s son Matthew Collins explained to news station FOX 13, “Everything we are as a company or individuals comes back to the love that this woman has instilled in us our whole lives,” Collins said.

The company Collins speaks of is We Care Heating and Air, a franchise the Collins sons own three branches of.

“We grew up extremely poor,” Collins went on to say, “and even though we did not have much materialistic things…we have always had love.”

He makes no  bones about the fact that this gift to his mom was well-deserved. S”he has inspired so much of our lives, and has always been the solid rock of the family,” he said.

I don’t know about you, but I got teary-eyed watching Holt receive this amazing gift from her grown children. I mean, it gives me hope that one day my kids WILL appreciate everything I do for them, even though it may not seem like they do now. And it’s so special that the boys remembered their first love…their mom!

Previous articleLet Them Be Little
Next articleTo My Firstborn: I Didn’t Know