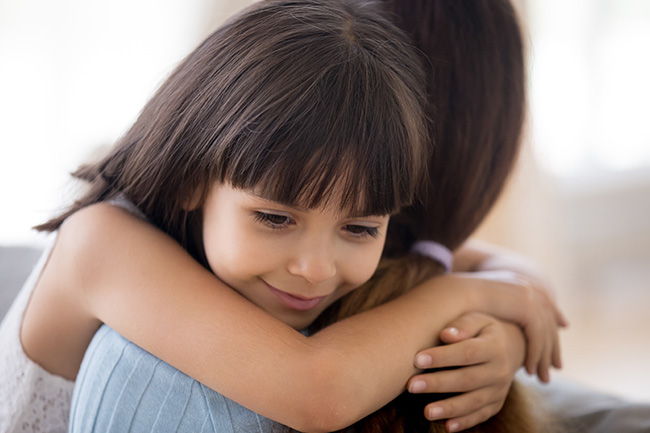 How to Encourage Gratitude in Our Children

Isn’t it easy to feel entitled and frustrated when we don’t get our way? How can we combat that attitude with our children and ourselves?

Through Scripture, stories, and praying.

The other day when I walked into my eight-year-old daughter’s bedroom, she was fuming in frustration because “nothing” was going her way.

Her closest friend in school sat just two desks away, yet she spoke about the kid next to her being rude, another kid being mean, and now, for the life of her, she couldn’t get the rubber band around her ponytail just the way she wanted to. A true emergency. I could see smoke coming from her ears. Almost.

I had noticed a trend.

While I want to hear about the bad and good happening in her life, lately, I noticed one complaint after another, blooming grumpiness and ungratefulness.

I sat on my daughter’s bed, tears swelling her eyes. I told her how frustration and anger don’t help, but just make us miserable – to try to focus on giving thanks instead.

But she desperately said, “I can’t help it! I just get so frustrated and mad. I’m so bad at this.”

In that moment, I saw her hurt. I needed to quit preaching and just connect with her.

My mind wandered to Tedd Tripp’s advice at a parenting conference.

He said that when correcting our kids, to get on their level, and let them know that we’re working on the same things – that we are in this together.

So, I looked into her tear-swollen eyes and told her I struggle with the same thing. My daughter looked up at me. She was listening.

I told her that it’s easy for me to complain and pout when I don’t get my way too, but there’s a verse that helps me with that: “Be joyful always, pray continually, give thanks in all circumstances; for this is God’s will for you in Christ Jesus.” (1 Thessalonians 5:16-18)

We had already memorized this verse, so she was familiar with it.

I shared that when my mind jumps to self-pity, I try to thank the Lord for something instead and it changes my mind and heart.

He changes my mind and heart.

I know there is power in telling stories as Jesus did, so I shared a story with my daughter of a woman who also dealt with the issue of giving thanks. Corrie ten Boom.

This is what I told her…

Corrie ten Boom was a woman who loved Jesus. She bravely hid Jews because Hitler was trying to hurt them. And, Corrie was put in a prison camp because of it.

The soldiers took away each person’s belongings, including their Bibles. Miraculously, they never found Corrie’s Bible. Corrie slept on a flea-infested mattress, crammed with several other women, including her sister, Betsie.

Feeling hunger pains and fleas biting them, you would think they complained. But, instead, Betsie told Corrie about a verse that came to her mind.

All those years ago, the same verse we read, they also read: “Give thanks in all circumstances.”

Corrie asked her sister what on earth they could give thanks for. Betsie said she was thankful that the Lord allowed her to be with her sister in the prison camp when they could have been separated. Then, she thanked God for the fleas. Can you believe that?

Corrie told her sister that she could never give thanks for the fleas. But Betsie told Corrie they had to because it’s God’s will to give thanks in all circumstances.

So, they gave thanks for the fleas.

You know what happened because of those fleas? The soldiers wouldn’t come into the barracks where they stayed. Because of that, Corrie and Betsie were able to have Bible studies and share their hope of Jesus during a tough time.

None of that would have happened if the fleas hadn’t been there.

It’s a choice, I told my daughter. It’s a choice to give thanks always. We talked about replacing frustration and anger with this phrase: Thank you, Lord, for _______.

And, we talked about how we are in this together.

I drew her close and we prayed together. We gave thanks to the Lord and asked him to help us have grateful hearts.

I wiped my daughter’s wet cheeks, hugged her, and gave her some time to herself. After five minutes, she walked out of her room with a smile and joyful heart.

It’s a process for all of us – to walk the higher road of giving thanks always.

To walk the higher road of raising children who choose gratefulness over entitlement.

To walk the higher road of following Jesus.

But when we choose the higher road, we experience the full life that Jesus came to give us.

Linsey Driskillhttp://LinseyDriskill.com
My husband and I live in South Carolina and have eight-year-old triplets. I’m passionate about encouraging families in following Jesus and his words: to love God and love others. I love authenticity, simplicity, spontaneity, and a good cup of coffee! You can find me at LinseyDriskill.com and @BeautifulHeartedParenting